List of registered artists and artisans from Eeyou Istchee and surrounding areas.

Gain visibility in a global market and have access to training in arts and business. Artists and suppliers can register. 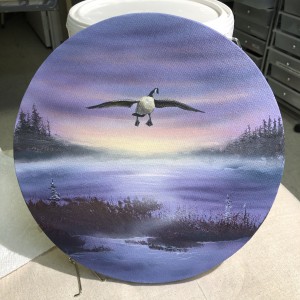 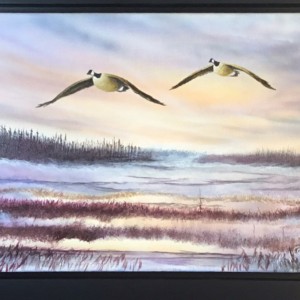 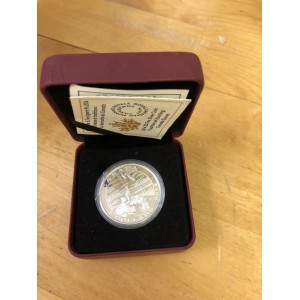 Short description of your art.

Tim Whiskeychan is a productive and prolific artist and generalist of sorts when it comes to the visual arts – he’s a painter, illustrator, sculptor and craftsman. Many samples of his work are displayed in his hometown of Waskaganish and throughout the greater James Bay community. Fluent in three languages, Whiskeychan is able to keep his modesty as we peruse his portfolio, while he claims paternity to a 25-foot granite monument standing in the heart of Waswanipi, He also introduces me to a collection of paintings, some of which had residency in metropolitan art galleries, and traveled as far as Normandy, France. His work includes sculpture (metal and granite), oil and acrylic painting, watercolour, stained glass and airbrushing. He has produced logos, banners, panels and signs of all kinds. Whiskeychan carries quite an impressive portfolio, to say the least. I was enthralled by a large stained-glass project, which adorns the local school library in a beautiful and appeasing light of spectral colours. The work features four geese by a shore – two of which are in flight. Majestic, ornamental… it certainly ranks among the top decorative projects ever designed for a school that I’ve seen. It could easily enhance a church, an embassy or any parliament building. The son of a tamarack decoy maker and a supportive mother, Whiskeychan learned from his parents the joy of tackling a task and completing whatever he starts. A self-taught artist in his early life – who spent hours upon hours sketching and observing – he finally at the age of 28 decided to enroll in the Fine Arts program at Cambrian College in Sudbury, Ontario, with a goal of improving his technique and seeking advice from professional artists. “We are never too old to learn… and learning is a lifelong process,” Whiskeychan states, unequivocally. At Cambrian, he met Jack Tapilla, an illustrator, and his wife Betty, a painter; the two became his teachers and mentors. They were the perfect match for him, and made him feel welcome right from the start. “The Tapillas helped me discover myself and take criticism with an open mind,” Whiskeychan said. “They often told me to ‘loosen up’, to ‘breathe’, and not to be so uptight about accuracy… They helped me see the bigger picture.” Whiskeychan received a recognition award from his college and his assignments were exhibited in the Art Gallery of Sudbury. He has been part of numerous exhibitions ever since and some of his work belongs to permanent collections. Whiskeychan has also been a recipient to many grants, awards and honorariums. Some of his work has been commissioned by the Grand Council of Crees (Eeyou Istchee) and the Nation magazine named him Best Cree Artist of James Bay for three consecutive years (1998 to 2000). Painting (Cree Style) Though he uses a variety of media, acrylic painting is Whiskeychan’s finer specialty. Like many other Native artists, Whiskeychan seeks optimal effect with an economy of actions – that is to create a sensation with a simple stroke that would have resulted from long hours of layering. We both agreed this trait is quite common among Native artists and could be the remnant of survival economy where Native people have been known to be practical about the time available and the results that are sought. Like other Native artists, Whiskeychan favours acrylic paint to oil because it is a “fast” medium. Since acrylic is water-based, it gives good efficiency. It is clean. It leaves no fumes. And Whiskeychan is proud to say that he’s been using the same paintbrushes for over 20 years. He also mixes airbrushing with classical painting because it helps create with more realism. Abstract painting is also privileged among his current artistic ventures. Content Portraits and nature scenes are common features in his work. Whiskeychan was able to develop his own Cree style by using his language, his culture and his knowledge of history. His interest in archeology and ethnography enables him to represent Native traditions and values in an honest and authentic fashion. His travels to Navajo reservations in the U.S. have also broadened his perspective on traditional topics. His work is archival as such, and often depicts whole episodes of Native life in fine detail. Native art is like a history book that we can read and learn from. Whiskeychan has produced many longitudinal story panels depicting multiple aspects of Cree life. Mixed media also transmits a bundle of information; canvas is replaced by gesso, deer hide, and moose hide while incorporating birch bark, caribou lacing and edging, and feathers. Future: Tim is now in the plans in teaching art to all ages and has currently have a bigger and studio in the hub of the community. And was honored for having one of many of his designs on a royal mint of Canada on November 2014. Tim is blessed to continue art and to be given all this skill and the gift of making art to many various events and still today Tim produces and design various murals and monuments. And Tim spend many hours to create his wonderful art to learn and share along with others and one of his wish is to bring others artist to explore his community and Cree culture.

Where did you learn your art?

I was mostly self taught artist , but it wasn’t until I decided to attend college in my mid twenties, that’s when learn new techniques and refined my level of art. The college name was Cambrian College and took the fine arts program for almost three years. My teaching also came from many designs and production of large scale mural to monuments. I had the privilege to work many professionals and master in their trade and help me to understand how each mediums worked.

Where do you find inspiration for your work?

Mostly from landscape and be looking and observations form various artist, my curiosity was always wide and read other artist methods and love challenging myself in producing various ways by drawing to painting and event designing all sort of concepts for mural and to metal monuments. And many people I met through out the years of my 38 years of productivity. But deep down my dad was my one of great supporter and set a good example of his hard woks and fine art in his own right and making beautiful tamarack decoys.

Have you received any formal training?

Training with others artist in some occasion, but most my training was from self taught , but I always took the initiatives in explore new ways and never ceased the moment with other leading artist that I meet in art seminars and to art exchanges in of town art residencies to art symposiums. Invitations in working with other gallery’s has widen my skills from seeing other masters

What other art forms do you practice?

I do carve and make decoys like my late dad Harry Whiskeychan , and I have good capacities in etching and making mix media forms of art.

Have you ever received any awards or special recognition?

I had been award as artist visual in 2016 The nation magazine in 90s I was nominated for three consecutive years for best cree artist in the Nation Magazine. At my first year of college I was selected during my school of one of the top 20 artists from the over 200 hundred art and graphic students of the college and with that I had the prestige and honour to showcase at the Sudbury Art Gallery among the top artist. At the same token I have a gpa Of 4.0 and made on the honorary award for art excellence at this college. And I proudly to mention also that I was selected for my design for production on one of the royal mint coins in 2014.

Do you sell your work? If so, How?

Yes sold many of my works through various levels from gallery’s in Montreal to some galleries . Many of my work is sold most of the cree communities and the Grand Council offices in Ottawa, Quebec Embassy and Cng buildings , many schools and governmental buildings, and recently to nonnative towns.

Has your art work ever been mentioned in any media?

Please provide any information on your buyers.

Band councils office local school for awards and gift to teachers Cng offices gift toward many important delegations Art work for inaugurations and gift of many service under the Cng , Grand Chief Matthew Coon-Come and Grand Chief Able Bosum Collectors in various countries and province to Ontario and Quebec

Please provide any other information you would like to mention.

Im still very much productive and I have been now offering some art seminars to art workshops and residencies to reach out to younger and upcoming artists. I’m very open in assisting and helping others and I my self is still learning new methods and exploring other aspect of art productions. As of now i’m currently rep using an iPad for illustrations and concepts for entities and companies and even for researchers and writers and Graphic designers. Still do occasional drawings with pencil still but now adapting into new age of technology too.